This is my Welsh Corgi, Tru.  (If you really want to get to know her, she has her own Facebook page here.)  As you can see, she was sunbathing this morning while I was putting the finishing touches on the first pattern for the Parris House Hookers’ Circle subscription service, shipping this week.   As I posted on our Facebook page this morning, I am painfully aware that Tru is now about twelve years old, and that most of my time with her is behind us.   I never thought I could love a dog this fiercely until she came in to our lives, but here I am, pondering a post-Tru world even though as of right now, she is still happy, active, and healthy.

For this reason, I have been thinking lately that I need to gather up all the photos I have of her (there are many!), and also sit quietly with her, make a sketch of her sweet face, and hook it.    Now, I have never hooked an animal in a detailed way, the way I want to hook Tru’s image.   I want to capture the glint in her eye that still exists even though I see the encroaching cloudiness of cataracts.  I want to hook the pretty combination of “red” and white and maybe now a little gray that defines her face.  I want to add the teeny tiny white eyelashes and delicate fur in her ears.  I think this project is going to have to be refined and textural and multimedia, but since I can see it, I know I can make it a reality.

Prior to this I have not hooked many animals.  One of the most popular patterns in the shop is “Tesla’s First Snow,” which, rather than a late-in-life portrait, is a depiction of our big orange tabby, Tesla, as a four month old kitten seeing his first snowfall out the window.  After being initially perplexed, he wanted to “catch” the snowflakes as they cascaded down.   I snapped a picture of the scene and the result was this:

As you can see, this is a very primitive rendering of Tesla.  His back is turned to us so that, frankly, I didn’t need to deal with the detail of his face, although that is still true to the photograph.  This was done in 2012.  I learned to hook in 2011.  I was simply not ready to take on the complexities of Tesla’s face!   (In case anyone is wondering, he is named for Nikola Tesla, the scientist/inventor.  This happens when you have four sons who dig science.)

I also hook animals for Beekman 1802, and it is absolutely true that I love these animals I’m depicting.   I actually met Polka Spot back in 2014 on the day Jen and I first presented our work to Josh and Brent.  They kindly sent us on a farm tour with Megan, who was then their artisan coordinator, and we were thrilled to see the baby goats, Bubby the cat, Onder the dog, and, as they say, “every living thing at Beekman farm.”   Bubby passed away since then, and Polka has also “gone to Paris,” but both of them had distinct personalities.  Polka was one of the most regal animals I’ve ever encountered, and it was clear that she took her watch over the goats seriously.  Bubby was just one giant furball of love, demanding our attention while Onder ran in and out of the barn playfully.  Here is the menagerie I hook for Beekman 1802.

Last year I had a major commission for a customer’s beloved Pharaoh Hound.  The story on that is here, and the result is below.

Why are we willing to put so much time and effort in to these portraits of our favorite pets or animals?  Or, if we aren’t artisans ourselves, willing to commission someone else to create them?   I think it’s about the innocence, unconditional love, and nobility of character we so often find in our pets.  I don’t say that to anthropomorphize animals.  As my biologist/ecologist son, James, likes to remind me, “They don’t think the way we do.”   And, of course, he’s right.  They don’t think the way we do.   In fact, it’s impossible for us, really, to get inside their heads.  They are coming from an entirely different reality, biology, instinct than we are.  And yet…it is so easy to make important connections with them, and they with us.  We want to immortalize them in art because we know – we are so painfully aware – that their lifespans are much shorter than we’d like and that our own lives are so much better with them by our sides.

Sometimes they’re exasperating.  Tesla wants to kill my knitting if I don’t put it up and out of the way.  Tru wants to be directly under my feet if I’m preparing chicken for dinner.   Tesla is incapable of having a hairball in any location except on a carpet.  Tru occasionally gets so excited over visitors she pees at their feet.  Yeah.   And the fur.  It’s everywhere.  No vacuum on this planet is its equal.

Yesterday, my oldest son, Robert, shared this picture of his and his girlfriend’s, Tracy’s, cats peering out their apartment window in much the same way Tesla peered out at his first snow about five or six years ago.   They are Valentine and Playdough, respectively, and both are well under a year old.   Just the beginning of another generation’s connection with animals.

I hope you will share pictures of your animals and also pictures of artwork you’ve done inspired by them.  Feel free to tell their stories and what they mean to you.  I look forward to learning all about them.

Have you ever been in an antique home and seen an 18th or 19th century silhouette portrait?  Or maybe when you were growing up your parents had one made of you?  Well here’s a modern twist on a classic idea, and it’s a whole lot cozier than the paper variety silhouettes you may have on your walls!

You may recognize the handsome silhouettes above as those of Brent Ridge and Josh Kilmer-Purcell, the Fabulous Beekman Boys and founders of Beekman 1802.  Jen and I feel very honored to be making these pillows in celebration of Josh and Brent’s second wedding anniversary, which, by tradition, is the cotton anniversary.  These pillows are available in your image or images with a variety of colors of wool backs or backed with 100% organic cotton fabric.  Additionally, the pillows are stuffed with 100% organic cotton batting in a cotton muslin case.

The process of making these is extremely personalized.  Once your order is placed, Beth will be in touch to arrange for you to provide the photographs that will be the basis of your design artwork, and to talk about the colors you would like for your hooked background and pillow backing.  Once your artwork is sketched out, you will have the opportunity to approve it before the hooking begins.  Once approved, Beth or Jen will hand hook and sew your pillow.

This is what the artwork looks like when submitted for customer approval. 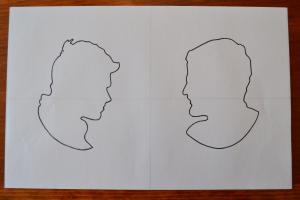 These would make wonderful wedding or anniversary gifts, or keepsakes of growing children.

You may order exclusively through Beekman 1802 by clicking HERE.

We’d love to work on your modern heirloom!

Join Beth’s other half, Bill Miller, for a fun morning of cold process soap making. We will be making an all natural cold process soap recipe using vegetable oils for the base and essential oils for the scents. These soaps are vegan friendly! Each student will leave with a 2 lb. soap wood soap ... Read more
Feb
1
Sat
10:00 am Beginner Dye Class @ Parris House Wool Works
Beginner Dye Class @ Parris House Wool Works
Feb 1 @ 10:00 am – 1:00 pm

Yes, you are talented and yes, you can draw stick figures and a whole lot more.   Open up to your creativity (yes, you have it) as we talk about how to keep a rug journal, brainstorm pattern ideas, learn basic principles of pattern design, and go through the process of creating our own ... Read more
Mar
7
Sat
10:00 am Embellishing Techniques & Materi... @ Parris House Wool Works
Embellishing Techniques & Materi... @ Parris House Wool Works
Mar 7 @ 10:00 am – 2:00 pm

Ever wonder how to finish your hooked coasters or pillows or just want a refresher or someone to hold your hand through the process? Come on out to this class. *THIS IS A “BRING-YOUR-OWN-UNFINISHED-PROJECT” CLASS!* In other words, you must bring your unfinished mats/coasters/pillows to class. Beth can provide the finishing materials, but the base ... Read more
View Calendar
Add

Finished and now enroute to my exceedingly kind and patient client. I hope it is loved and welcomes his family and friends for many years to come.

Get The Street Corner Newsletter!

Sign up to receive the latest news and updates

You have Successfully Subscribed!